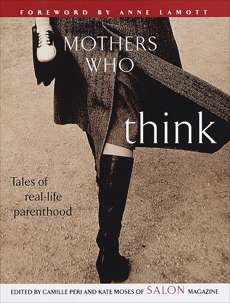 Synopsis: From the editors of the cutting-edge online magazine Salon come provocative essays that take an unflinching look at
the gritty truths and unreserved pleasures of contemporary motherhood.

Mothers Who Think: Tales of Real-Life Parenthood, which grew out of Salon's popular daily department of the same name, comprises nearly forty essays by writers grappling with the new and compelling ideas that motherhood has dangled before them. Elevating the discussion of motherhood above the level of tantrum control and potty training, this collection covers an unparalleled range of topics, from the impossibility of loving your children equally to raising a son without a father, from worrying that your privileged black child is becoming too "white" to the free-floating anger most mothers feel but wouldn't dare admit--except to other mothers. The intelligent, candid essays in Mothers Who Think are a testament to the notion that motherhood gives women more to think about, not less.

Irreverent, wistful, hilarious, fierce, tender, these essays offer an unsparing look at the myths and realities, serious and silly sides, and thankless and supremely satisfying aspects of being a mother.