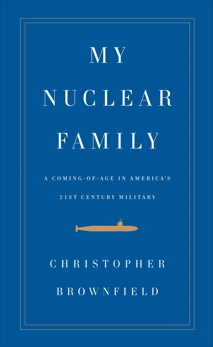 My Nuclear Family: A Coming-of-Age in America's Twenty-first Century Military

It begins in 2001. Christopher Brownfield is a naïve young midshipman. His heroes at the time: Oliver North and John McCain.

In My Nuclear Family, Brownfield writes about how he loved the navy for its “rigidity and its clarity in separating right from wrong”; how he cut his teeth there on the principles of energy and violence, strategy and thermodynamics, on war doctrine and weapons systems. The question was never if he was capable of killing; it was simply about methods and rationales.

He writes about his years serving on a nuclear submarine, with its hundred-ton back-up battery—the first hybrid vehicle capable of sustaining its environment and mission independent of oil.

We see Lieutenant Brownfield making his way, receiving his advanced nuclear supervisory certification from the departments of defense and energy, and, after years of training to become a nuclear submariner, being able to supervise an entire reactor plant aboard a nuclear warship.

He writes about his ship’s secret missions in the global war on terror and how he begins to experience his own eroding faith in the entire operation . . .

He describes his decision to leave the navy to attend graduate school at Yale, as his colleagues in the submarine force are faced with a new morbid reality—an involuntary lottery for service in Iraq. And how, for the sake of his country, his naval forefathers, and his mother (who believed in cleaning up after one’s own messes), Brownfield is determined to do something good in the name of the United States.

With one foot in the door at Yale, Brownfield jumps on the hand grenade and volunteers to fill a one-year tour of duty in Baghdad, working in the strategic headquarters, reporting to the top general on matters of oil and electricity.

Brownfield, a submariner in the sands of the desert, writes about how he finds himself better equipped to handle the energy problem than his much more senior colleagues, many of whom had no prior experience in energy or management. With the arrival in Iraq of General Petraeus, and with policy changes and an overhaul in strategy, Brownfield is put center stage in the unit, supervising the colonel who was his former superior in rank; briefing cabinet ministers, ambassadors, and generals, who endorse his groundbreaking plans for energy efficiency, development, and counterinsurgency . . .