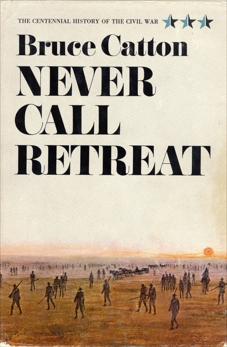 Synopsis: "A magnificent stylist . . . a first-rate historian. Familiarity with subject matter resulting from many years of study and narrative talents exceeding those of any other Civil War historian enable him to move along swiftly and smoothly and produce a story that is informative, dramatic, and absorbingly interesting." —Dr. Bell I. Wiley, after reading the manuscript of Never Call Retreat

The final volume of Bruce Catton's monumental Centennial History of the Civil War traces the war from Fredericksburg through the succeeding grim and relentless campaigns to the Courthouse at Appomattox and the death of Lincoln.

This is an eloquent study of the bitterest years of the war when death slashed the country with a brutality unparalleled in the history of the United States. Through the kaleidoscope tone and temper of the struggle, two men, different in stature, but similar in dedication to their awesome tasks, grappled with the burden of being leaders both in politics and war. In the north Lincoln remained resolute in the belief that a house divided against itself could not stand. His determination and uncanny vision of the destiny of the country and its people far transcended the plaguing tensions, fears, and frustrations of his cabinet and Congress. Mr. Lincoln’s use of vast resources is brilliantly contrasted to Davis’s valiant struggle for political and economic stability in a hopelessly fragmented and underdeveloped south. Though Davis never lacked for spirit and dedication, his handicaps were severe. This was not a war to be won by static ideals and romanticism. As Mr. Lincoln managed to expand and intensify the ideals that sustained the Northern war effort, Mr. Davis was never able to enlarge the South’s. This was a war to be won by flexibility in though, strength in supplies, and battles. And so they were fought––Fredericksburg, The Wilderness, Chancellorsville, Vicksburg, Gettysburg.