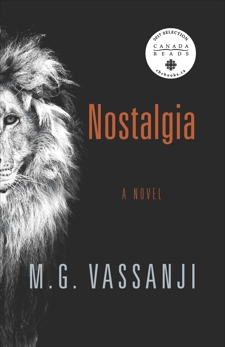 Synopsis: From one of Canada's most celebrated writers, two-time Giller Prize winner Moyez Vassanji, comes a taut, ingenuous and dynamic novel about a future where eternal life is possible, and identities can be chosen.


In the indeterminate future in an unnamed western city, physical impediments to immortality have been overcome. As society approaches the prospect of eternal life, a new problem must be confronted: with the threat of the brain's storage capacity being overwhelmed, people want to move forward into the future free from redundant, unwanted and interfering memories. Rejuvenated bodies require rejuvenated identities--all traces of a person's past are erased and new, complete fictions are implanted in their stead. On occasion, though, cracks emerge, and reminders of discarded lives seep through. Those afflicted suffer from Leaked Memory Syndrome, or Nostalgia, whereby thoughts from a previous existence burrow in the conscious mind threatening to pull sufferers into an internal abyss.
Doctor Frank Sina specializes in sealing these memory leaks. He is satisfied in his profession, more or less secure in the life he shares with his much younger lover, content with his own fiction--a happy childhood in the Yukon, an adulthood marked by the influence of a mathematician father and poet mother. But one day, Presley Smith arrives in Frank's office. Persistent thoughts are torturing Presley, recurring images of another time and place. As he tries to save Presley from the onslaught of memory, Frank finds clues that suggest Presley's past may be located in war-torn, nuclear-ravaged Maskinia, a territory located in the southern hemisphere, isolated from the north by fiercely guarded borders and policy barriers. Frank's suspicions are only intensified when the Department of Internal Security takes an interest in Presley. They describe him as one of their own, meaning his new life was one they created for him, and they want him back. Who was Presley before the Department remade him, what secrets are buried in the memories that are encroaching upon him?
As Frank tries to save Presley from both internal and external threats, cracks emerge in his own fiction, and the thoughts that sneak through suggest a connection with the mysterious Presley that goes well beyond a doctor and his patient.