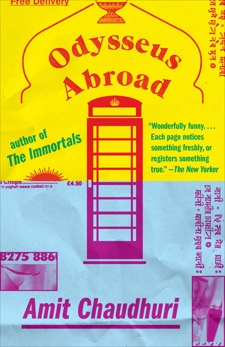 Synopsis: From the widely acclaimed writer, a beguiling new novel, at once wistful and ribald, about a day in the life of two Indian men in London--a university student and his bachelor uncle--each coping in his own way with alienation, solitariness, and the very art of living.

It is 1985. Twenty-two-year-old Ananda has been in London for two years, practicing at being a poet. He's homesick, thinks of himself as an inveterate outsider, and yet he can't help feeling that there's something romantic, even poetic, in his isolation. His uncle, Radhesh, a magnificent failure who lives in genteel impoverishment and celibacy, has been in London for nearly three decades. Odysseus Abroad follows them on one of their weekly, familiar forays about town. The narrative surface has the sensual richness that has graced all of Amit Chaudhuri's work. But the great charm and depth of the novel reside in Ananda's far-ranging ruminations (into the triangle between his mother, father, and Radhesh--his mother's brother, his father's best friend; his Sylheti/Bengali ancestry; the ambitions and pressures that rest on his shoulders); in Radhesh's often artfully wielded idiosyncrasies; and in the spiky, needful, sometimes comical, yet ultimately loving connection between the two men.