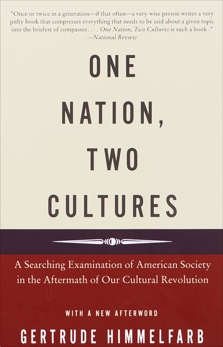 One Nation, Two Cultures: A Searching Examination of American Society in the Aftermath of Our Cultural Rev olution

Synopsis: In One Nation, Two Cultures, one of today's most respected and articulate cultural critics gives us a penetrating examination of the gulf between the two sides of American society -- a divide that cuts across class, racial, ethnic, political, and sexual lines. While one side originated in the traditional idea of republican virtue, the other emerged from the counterculture of the late 1960s and has become the dominant culture of today.

In clear and vigorous prose, Himmelfarb argues that while the dominant culture pervades journalism, academia, television, and film, a "dissident culture" continues to promote the values of family, a civil society, sexual morality, privacy, and patriotism. The clash between these two cultures affects all areas of American society.

Despite her forceful critique, Himmelfarb sees encouraging signs for the future of American culture. She explores the place of religion, family, and the law in American life and proposes democratic remedies for the nation's moral and cultural diseases. Though there are many legitimate grievances against government, she contends, our citizenry cannot afford to delegitimize it. And she concludes that it is a tribute to Americans that, without serious social strife, we remain one nation even as we are divided into two cultures.

One Nation, Two Cultures is a stimulating work, one sure to provoke lively discussion and controversy.