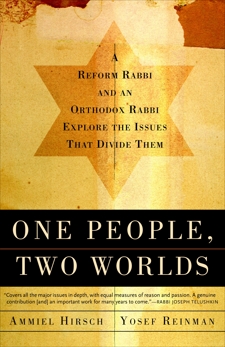 One People, Two Worlds: A Reform Rabbi and an Orthodox Rabbi Explore the Issues That Divide Them

Synopsis: After being introduced by a mutual friend in the winter of 2000, Reform Rabbi Ammiel Hirsch and Orthodox Rabbi Yosef Reinman embarked on an unprecedented eighteen-month e-mail correspondence on the fundamental principles of Jewish faith and practice. What resulted is this book: an honest, intelligent, no-holds-barred discussion of virtually every “hot button” issue on which Reform and Orthodox Jews differ, among them the existence of a Supreme Being, the origins and authenticity of the Bible and the Oral Law, the role of women, assimilation, the value of secular culture, and Israel.

Sometimes they agree; more often than not they disagree—and quite sharply, too. But the important thing is that, as they keep talking to each other, they discover that they actually like each other, and, above all, they respect each other. Their journey from mutual suspicion to mutual regard is an extraordinary one; from it, both Jews and non-Jews of all backgrounds can learn a great deal about the practice of Judaism today and about the continuity of the Jewish people into the future.