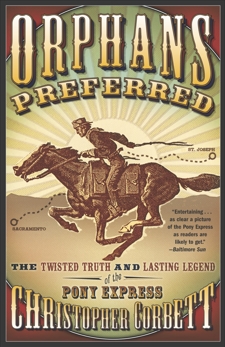 Orphans Preferred: The Twisted Truth and Lasting Legend of the Pony Express

The Pony Express is one of the most celebrated and enduring chapters in the history of the United States, a story of the all-American traits of bravery, bravado, and entrepreneurial risk that are part of the very fabric of the Old West. No image of the American West in the mid-1800s is more familiar, more beloved, and more powerful than that of the lone rider galloping the mail across hostile Indian territory. No image is more revered. And none is less understood. Orphans Preferred is both a revisionist history of this magnificent and ill-fated adventure and an entertaining look at the often larger-than-life individuals who created and perpetuated the myth of “the Pony,” as it is known along the Pony Express trail that runs from St. Joseph, Missouri, to Sacramento, California. The Pony Express is a story that exists in the annals of Americana where fact and fable collide, a story as heroic as the journey of Lewis and Clark, as complex and revealing as the legacy of Custer’s Last Stand, and as muddled and freighted with yarns as Paul Revere’s midnight ride. Orphans Preferred is a fresh and exuberant reexamination of this great American story.