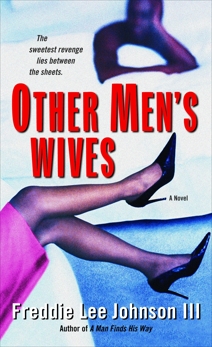 Other Men's Wives: A Novel

Synopsis: Denmark Wheeler had it all: a gorgeous wife, Sierra, whom he passionately loved, and a respectable job that allowed him to keep her living in the style to which she was accustomed. The good life wasn’t handed to him on a silver platter, though. Growing up in the Cleveland ghetto, his father was shot by a drug addict, he worked the streets to help his sister through college, and he made his fair share of enemies along the way.

Yet not even his tough upbringing prepared him for the mysterious DVD that showed up on his doorstep, its contents revealing an explicit sexual encounter between his wife and another man, whose face was purposely blurred. Sierra’s betrayal is heart wrenching, and Denmark’s on the warpath to find out the identity of the man behind it. One thing’s sure: It’s someone close to him.

Suddenly everyone is suspect, especially his two best buddies, and he’ll stop at nothing to exact his revenge–even if it means sleeping with their wives to get it. But when Denmark takes justice into his own hands, he discovers a truth even more shocking than his wife’s infidelity. . . .

In this gritty revenge tale, Freddie Lee Johnson III takes us into the mind of a man consumed with grief and rage. Full of jump-off-the-page characters and fast-paced drama, Other Men’s Wives is an explosive ride fueled by love, lust, and deceit.