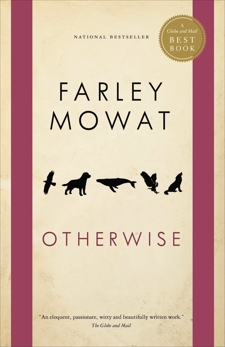 Synopsis: A Canadian icon gives us his final book, a memoir of the events that shaped this beloved writer and activist.

Farley Mowat has been beguiling readers for fifty years now, creating a body of writing that has thrilled two generations, selling literally millions of copies in the process. In looking back over his accomplishments, we are reminded of his groundbreaking work: He single-handedly began the rehabilitation of the wolf with Never Cry Wolf. He was the first to bring advocacy activism on behalf of the Inuit and their northern lands with People of the Deer and The Desperate People. And his was the first populist voice raised in defense of the environment and of the creatures with whom we share our world, the ones he has always called The Others.

Otherwise is a memoir of the years between 1937 and the autumn of 1948 that tells the story of the events that forged the writer and activist. His was an innocent childhood, spent free of normal strictures, and largely in the company of an assortment of dogs, owls, squirrels, snakes, rabbits, and other wildlife. From this, he was catapulted into wartime service, as anxious as any other young man of his generation to get to Europe and the fighting. The carnage of the Italian campaign shattered his faith in humanity forever, and he returned home unable and unwilling to fit into post-war Canadian life. Desperate, he accepted a stint on a scientific collecting expedition to the Barrengrounds. There in the bleak but beautiful landscape he finds his purpose — first with the wolves and then with the indomitable but desperately starving Ihalmiut. Out of these experiences come his first pitched battles with an ignorant and uncaring federal bureaucracy as he tries to get aid for the famine-stricken Inuit. And out of these experiences, too, come his first books.

Otherwise goes to the heart of who and what Farley Mowat is, a wondrous final achievement from a true titan.