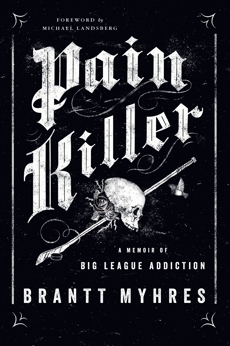 Synopsis: "This book is at times startling, yet very real and down to earth . . . I saw [Brantt] in all phases of his life and his career. I consider him a friend and an ally. Pain Killer sends a strong message." --Darryl Sutter, former NHL player, coach, and GM

From the only player to be banned for life from the NHL, a harrowing tale of addiction, and an astonishing path to recovery.

Brantt Myhres wasn't around for the birth of his daughter. Myhres had played for seven different NHL teams, and had made millions. But he'd been suspended four times, all for drug use, and he had partied his way out of the league. By the time his daughter was born, he was penniless, sleeping on a friend's couch. He'd just been released from police custody. He had a choice between sticking around for the birth, or showing up for league-mandated rehab. He went to rehab. For the fifth time.

This is his story, in his own words, of how he fought his way out of minor hockey into the big league, but never left behind the ghosts of a bleak and troubled childhood. He tells the story of discovering booze as a way of handling the anxiety of fighting, and of the thrill of cocaine. In the raw language of the locker room, he tells of how substance abuse poisoned the love he had in his life and sabotaged a great career. Full of stories of week-long benders, stripper-filled hot tubs, motorcycle crashes, and barroom brawls, Pain Killer is at its most powerful when Myhres acknowledges how he let himself down, and betrayed those who trusted him. Again and again, he fools the executives and doctors who gave him a second chance, then a third, then a fourth, and with each betrayal, he spirals further downward.

But finally, on the eve of his daughter's birth, when all the money was gone, every bridge burnt, and every opportunity squandered, he was given a last chance. And this time, it worked.

It worked so well, that not only has he been around for his daughter for the past eleven years, in 2015 he was signed by the LA Kings as a "sober coach": a guy who'd been there, a guy who could recognize and help solve problems before they ruined lives and made headlines (as the Kings had seen happen three times that season). Not only did Myhres save himself, he saved others.

Unpolished, unpretentious, and unflinching, Myhres tells it like it is, acknowledging every mistake, and painting a portrait of an angry, violent, dangerous man caught in the vice of something he couldn't control, and didn't understand. If Brantt Myhres can pull himself together, anyone can. And he does, convincingly, and inspiringly.