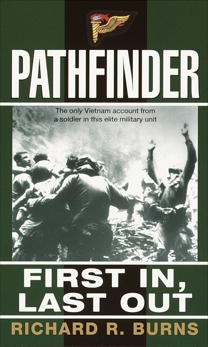 Pathfinder: First In, Last Out: A Memoir of Vietnam

Synopsis: December 1967: Richard Burns had just arrived in Vietnam as part of the fourteen-man 101st Pathfinder Detachment. Within just one month, during a holiday called Tet, the Communists would launch the largest single attack of the war--and he would be right in the thick of it. . . .

In Vietnam, Richard Burns operated in live-or-die situations, risking his life so that other men could keep theirs. As a Pathfinder--all too often alone in the middle of a hot LZ--he guided in helicopters disembarking troops, directed medevacs to retrieve the wounded, and organized extractions. As well as parachuting into areas and supervising the clearing of landing zones, Pathfinders acted as air-traffic controllers, keeping call signs, frequencies, and aircraft locations in their heads as they orchestrated takeoffs and landings, often under heavy enemy fire.

From Bien Hoa to Song Be to the deadly A Shau Valley, Burns recounts the battles that won him the Silver Star, Bronze Star, Purple Heart, and numerous other decorations. This is the first and only book by a Pathfinder in Vietnam . . . or anywhere else.