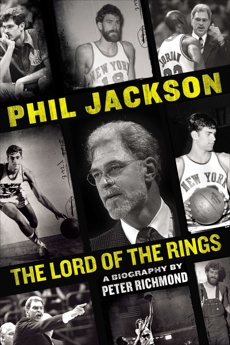 Phil Jackson: Lord of the Rings

Synopsis: With eleven championship rings to his name, Phil Jackson is internationally recognized as one of the greatest coaches in the history of the NBA. Known as a defensive disrupter and a master fouler during his early days as a New York Knick and later celebrated as the “Zen Master” for his inspirational tactics as a leader, Jackson has had a long and storied career marked by constant self-reflection and reinvention. This is the man who led Michael Jordan and the Chicago Bulls to six championships, Kobe Bryant and the Los Angeles Lakers to five; who was inducted into the Basketball Hall of Fame; and who retired in 2011, an official legend—and the most sought-after free-agent coach in history.
As befits a legend, Jackson has written several candid, insightful books about his life and career, but now one of America’s most respected sportswriters turns an unvarnished light on Jackson’s strange and remarkable journey, from his sheltered childhood and adolescence in Montana and North Dakota, through his years playing at Madison Square Garden, to his experiences coaching Jordan, Bryant, and more of the greatest players of our time. New York Times-bestselling author Peter Richmond has written a personal, definitive, revealing biography of a veritable sports genius, and an American classic.