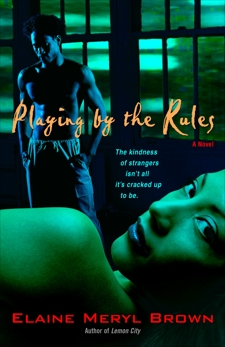 Playing by the Rules: A Novel

Synopsis: “Playing by the rules isn’t always easy–but in this quirky, self-cloistered community, Lemon City’s peculiarly delightful, eccentric residents do their best to follow the town’s ten mandates–even with outsiders. Elaine Meryl Brown’s storytelling is new and fresh, yet warmly familiar.”
–Virginia DeBerry, co-author of Tryin’ to Sleep in the Bed You Made

When there’s a knock on the Dunlap’s door in the middle of Thanksgiving dinner, Nana knows it can’t be good. The last time an outsider managed to worm his way into Lemon City, mischief followed. But despite her doubts, she can’t turn away the young man who’s kidnapped his baby sister from an unfit foster mother.

Before long, Jeremiah and Ruby Rose are practically part of the family. But that’s not sitting well with everyone–especially Medford, the boyfriend of Nana’s spunky granddaughter, Louise. It seems Louise has taken a shine to Jeremiah, and Medford’s suddenly got some stiff competition. Of course he’s too busy tracking down his birth mother–who left him on a doorstep when he was a baby–to be bothered with Louise’s flirtatious nature.

As Medford moves closer to the truth about his mom, young Ruby Rose finds comfort in her newfound home, Louise wavers between love and lust, and Nana prepares to give her feisty old neighbor a run for her money at the annual fair’s tomato contest. By summer’s end, a mystery will be solved as Lemon City secrets reveal themselves–and bring about more than a few changes of heart.