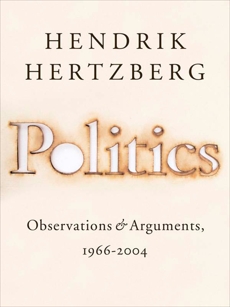 Synopsis: Cause for jubilation: One of America’s wisest and most necessary voices has distilled what he knows about politics, broadly speaking, into one magnificent volume.

Here at last are Henrik Hertzberg’s most significant, hilarious, and devastating dispatches from the American scene he has chronicled for four decades with an uncanny blend of moral seriousness, high spirits, and perfect rhetorical pitch. Politics is at once the story of American life from LBJ to GWB and a testament to the power of the written word in the right hands. In those hands, politics encompasses everyone from Jerry Garcia to Rush Limbaugh, every place from New Hampshire to Nicaragua, and everything from Playboy vs. Penthouse to Bush vs. Gore.

Hendrik Hertzberg breaks down American politics into its component parts—campaigns, debates, rhetoric, the media, wars (cultural, countercultural, and real), high crimes and misdemeanors, the right, and more. Each section begins with a new piece of writing framing the subject at hand and contains the choicest, most illuminating pieces from his body of work. Politics is a tour of the defining moments of American life from the mid-’60s till the mid-’00s, a ride though recent American history with one of the most insightful and engaging guides imaginable, a writer who consistently makes us see more clearly and feel more deeply.

“Politics is invaluable for all sorts of reasons—chief among them being decades of elegant writing in the service of surgical intelligence.”—Toni Morrison