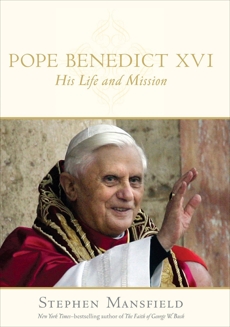 Synopsis: Includes a new foreword on the resignation and legacy of Pope Benedict XVI.

The sudden resignation of Pope Benedict XVI comes as the capstone to a papacy that that shocked some and delighted others. Pope Benedict was both an ardent intellectual and a driven traditionalist charged with leading a divided Catholic Church into a new era.

In Pope Benedict XVI, bestselling author Stephen Mansfield tells the story of a youth who grew up in Nazi Germany and went from being a liberal theologian associated with Vatican II to a theological conservative who became Pope John Paul’s closest ally. As a cardinal, the outgoing pope pursued a firmly traditional path in the last quarter century: he excommunicated radical priests, cracked down on Marxist liberation theology in Latin America, and shaped some of John Paul’s more socially conservative positions. He also drew a line of distinction between Catholicism and other faiths, promulgating respect for—but not equality among— the historic religions. To some, Pope Benedict was the ultimate insider whose election ensured that the revolution of John Paul was rendered permanent in our century.

Mansfield’s portrait of Pope Benedict was validated by recent history: Benedict XVI will be remembered as the Great Custodian. He sustained the return to tradition marked by John Paul.

Pope Benedict XVI examines its subject specifically from the perspective of a non-Catholic—a committed Christian without fealty to Rome. Mansfield’s academic depth, his poetic but widely accessible writing style, and his ability to take complex religious ideas and make them understandable to the nonreligious make his treatment of Pope Benedict XVI significance for readers of all philosophies and faiths.