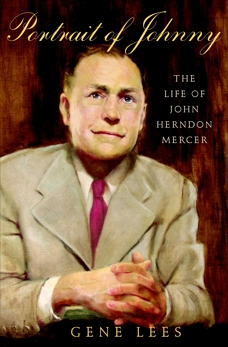 Portrait of Johnny: The Life of John Herndon Mercer

Synopsis: An intimate biography of the great songwriter, this is also a deeply affectionate memoir by one of Johnny Mercer’s best friends.

“Moon River,” “Laura,” “Skylark,” ”That Old Black Magic,” “One for My Baby,” “Accentuate the Positive,” “Satin Doll,” “Days of Wine and Roses,” “Something’s Gotta Give”—the honor roll of Mercer’s songs is endless. Both Oscar Hammerstein II and Alan Jay Lerner called him the greatest lyricist in the English language, and he was perhaps the best-loved and certainly the best-known songwriter of his generation. But Mercer was also a complicated and private man.

A scion of an important Savannah family that had lost its fortune, he became a successful Hollywood songwriter (his primary partners included Harold Arlen and Jerome Kern), a hit recording artist, and, as co-founder of Capitol Records, a successful businessman, but he remained forever nostalgic for his idealized childhood (with his “huckleberry friend”). A gentleman, a nasty drunk, funny, tender, melancholic, tormented—Mercer was a man immensely talented yet plagued by
self-doubt, much admired and loved but never really understood.

In music historian and songwriter Gene Lees, Mercer has his perfect biographer, who deals tactfully but directly with Mercer’s complicated relationships with his domineering mother; his tormenting wife, Ginger; and Judy Garland, who was the great love of his life. Lees’s highly personal examination of Mercer’s life is sensitive as only the work of a friend of many years could be to the conflicts in Mercer’s nature. And it is filled with insights into Mercer’s work that could come only from a fellow lyricist (whose own lyrics were much admired by Mercer).