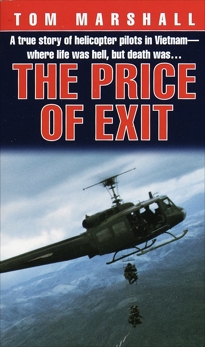 Price of Exit: A True Story of Helicopter Pilots in Vietnam

Synopsis: "The risk of a fatal catastrophe was constant. The NVA was the enemy, but the ultimate opponent was, quite simply, death. . . ."

For assault helicopter crews flying in and around the NVA-infested DMZ, the U.S. pullout from Vietnam in 1970-71 was a desperate time of selfless courage. Now former army warrant officer Tom Marshall of the Phoenix, C Company, 158th Aviation Battalion, 101st Airborne, captures the deadly mountain terrain, the long hours flown under enormous stress, the grim determination of hardened pilots combat-assaulting through walls of antiaircraft fire, the pickups amid exploding mortar shells and hails of AK fire, the nerve-racking string extractions of SOG teams from North Vietnam. . . . And, through it all, the rising tension as helicopter pilots and crews are lost at an accelerating pace.

It is no coincidence that the Phoenix was one of the most highly decorated assault helicopter units in I Corps. For as the American departure accelerated and the enemy added new, more powerful antiaircraft weapons, the helicopter pilots, crew chiefs, and gunners paid the heavy price of withdrawal in blood. For more than 30 Percent of Tom Marshall's 130 helicopter-school classmates, the price of exit was their lives. . . .