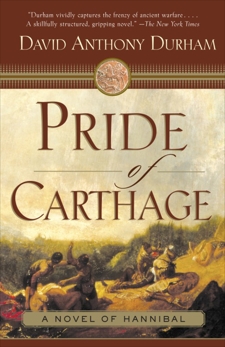 This epic retelling of the legendary Carthaginian military leader’s assault on the Roman empire begins in Ancient Spain, where Hannibal Barca sets out with tens of thousands of soldiers and 30 elephants. After conquering the Roman city of Saguntum, Hannibal wages his campaign through the outposts of the empire, shrewdly befriending peoples disillusioned by Rome and, with dazzling tactics, outwitting the opponents who believe the land route he has chosen is impossible. Yet Hannibal’s armies must take brutal losses as they pass through the Pyrenees mountains, forge the Rhone river, and make a winter crossing of the Alps before descending to the great tests at Cannae and Rome itself.

David Anthony Durham draws a brilliant and complex Hannibal out of the scant historical record–sharp, sure-footed, as nimble among rivals as on the battlefield, yet one who misses his family and longs to see his son grow to manhood. Whether portraying the deliberations of a general or the calculations of a common soldier, vast multilayered scenes of battle or moments of introspection when loss seems imminent, Durham brings history alive.