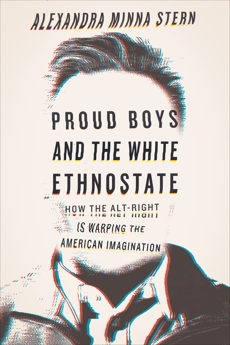 Synopsis: What is the alt-right? What do they believe, and how did they take center stage in the American social and political consciousness?

From a loose movement that lurked in the shadows in the early 2000s, the alt-right has achieved a level of visibility that has allowed it to expand significantly throughout America’s cultural, political, and digital landscapes. Racist, sexist, and homophobic beliefs that were previously unspeakable have become commonplace, normalized, and accepted—endangering American democracy and society as a whole. Yet in order to dismantle the destructive movement that has invaded our public consciousness, we must first understand the core beliefs that drive the alt-right.

To help guide us through the contemporary moment, historian Alexandra Minna Stern excavates the alt-right memes and tropes that have erupted online and explores the alt-right’s central texts, narratives, constructs, and insider language. She digs to the root of the alt-right’s motivations: their deep-seated fear of an oncoming “white genocide” that can only be remedied through swift and aggressive action to reclaim white power. As the group makes concerted efforts to cast off the vestiges of neo-Nazism and normalize their appearance and their beliefs, the alt-right and their ideas can be hard to recognize. Through careful analysis, Stern brings awareness to the underlying concepts that guide the alt-right and animate its overlapping forms of racism, xenophobia, transphobia, and anti-egalitarianism. She explains the key ideas of “red-pilling,” strategic trolling, gender essentialism, and the alt-right’s ultimate fantasy: a future where minorities have been removed and “cleansed” from the body politic and a white ethnostate is established in the United States. By unearthing the hidden mechanisms that power white nationalism, Stern reveals just how pervasive this movement truly is.