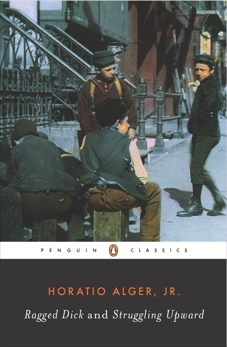 Synopsis: From the 1860's through the 1890s, Horatio Alger wrote hundreds of novels to teach young boys the merits of honesty, hard work, and cheerfulness in the face of adversity. As Carl Bode points out in his introduction, Horatio Alger filled a void in American literature and met scant competition both in the nature and the number of his works. Like his heroes, Alger rose to the top by chance, coincidence, and hard work.

The hero of Ragged Dick is a veritable "diamond in the rough"—as innately virtuous as he is streetwise and cocky. Immediately popular with young readers, the novel also appealed to parents, who repsonded to its colorful espousal of the Protestant ethic. Struggling Upward, published nearly thirty years later, followed the same time-tested formulas, and despite critical indifference it, too, had mass appeal.