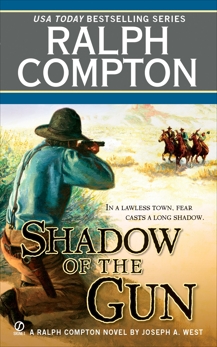 Ralph Compton Shadow of the Gun

Synopsis: A lawless town lives in the shadow of fear in this western in Ralph Compton's USA Today bestselling series.

Tam Elliot founded Eden Creek to be a utopia of peace and prosperity. The town achieved neither, and in despair Elliot took his own life. His daughter Allison rechristened the town Suicide, blaming its folks for its failure. From her hillside house, she collects property dues from the lost souls unfortunate enough to still reside there—and punishes anyone attempting to leave.

John McBride came west to start a new life, only to find himself saddled with the moniker “Tenderfoot Kid” after a single gunfight. He purchased a restaurant in Suicide hoping to put his past behind him, but with marauding Apaches, vicious outlaws, and rising tensions between the townsfolk and Allison Elliot, the town is a powder keg waiting to explode—and McBride’s presence just may be enough to light the fuse…