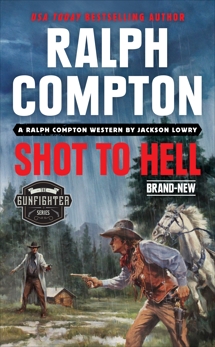 Synopsis: A deadly marksman is on the hunt to find his missing sister in this exhilarating new Ralph Compton Western.

One terrible day, fifteen-year-old Leif Gunnarson comes home to find his family home on fire and a gruesome scene inside: his parents are tied up, on the brink of death among the hellish flames, and his sister is nowhere to be found. His father can barely gasp a name: Simkins. And with that, Leif has his life’s mission—to track down Luther Simkins, notorious outlaw and gang leader, and find his sister.

Along the way, Leif finds a temporary home in Wyoming Bob’s Wild West Show. He has an innate talent with firearms but needs to hone those skills until he can outshoot anyone, even Simkins. Touring the West as the star performer known as Trickshot, Leif finally gets wind of an outlaw who could lead him to his sister. It will be the most important showdown of his life—but will his sharpshooting be a match for the shocking tricks the outlaw has up his sleeve?