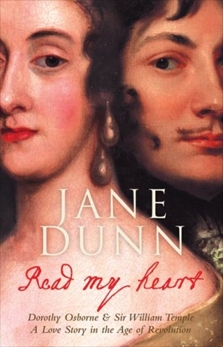 Read My Heart: Dorothy Osborne & Sir William Temple: A Love Story in the Age of Revolution

Sir William Temple (1628–99), the son of a staunch Parliamentarian, was just 20 when he first met Dorothy Osborne (1627–96), the daughter of committed Royalists. Smitten with one another, Temple and Osborne launched a clandestine courtship, for six long and at times desperate years, before they were finally able to marry. This was an age of tremendous social and political change in Britain. Civil war had wreaked havoc across the kingdom; Charles I had been executed; the monarchy had been restored; and finally, a second revolution had seen James II peacefully ousted in favour of his Protestant daughter, Mary, and her Dutch husband, William of Orange.

In Read My Heart, Jane Dunn chronicles this love story—and the tumultuous times in which both lovers played such important roles. William and Dorothy were highly perceptive and intelligent, and both were celebrated for their writing. William was a humane diplomat and an essayist, and Dorothy was a renowned letter writer whose 77 surviving missives to her lover brilliantly anatomize the couple’s lives and passion. This remarkable pair was at the social and political centre of life as contemporaries of Samuel Pepys, employers of Jonathan Swift and confidants of William of Orange. They inspired Queen Mary II’s marriage, changing the future of the royal family and of Great Britain itself.

Combining the Temples’ writing with her own extensive research, Jane Dunn brings to life a turbulent period of English history in all its exotic detail, from Dorothy’s perceptive wit to descriptions of plague, war, Machiavellian intrigue and the Great Fire of London. Lovers of history will find in Read My Heart a fascinating account of an age of revolution through the eyes of those who experienced it, while fans of Sandra Gulland and Philippa Gregory will delight in this true love story that rivals the most romantic of the age.