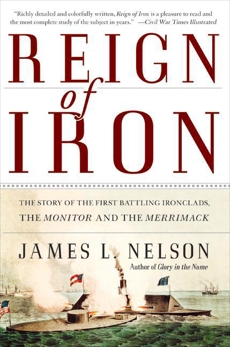 Reign of Iron: The Story of the First Battling Ironclads, the Monitor and the Merrimack

At the outbreak of the Civil War, North and South quickly saw the need to develop the latest technology in naval warfare, the ironclad ship. After a year-long scramble to finish first, in a race filled with intrigue and second guessing, blundering and genius, the two ships -- the Monitor and the Merrimack -- after a four-hour battle, ended the three-thousand-year tradition of wooden men-of-war and ushered in "the reign of iron."

In the first major work on the subject in thirty-five years, novelist, historian, and tall-ship sailor James L. Nelson, acclaimed author of the Brethren of the Coast trilogy, brilliantly recounts the story of these magnificent ships, the men who built and fought them, and the extraordinary battle that made them legend.