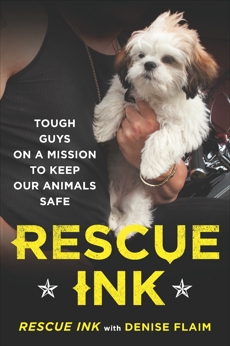 Synopsis: The true story of ten tough and tattooed bikers who rescue animals in danger

Though Joe Panz, Johnny O, Batso, Big Ant, G, Angel, Des, and Eric initially met and formed their friendships at tattoo and motorcycle conventions, they soon learned that they shared another passion: animals. Each had been rescuing troubled animals on their own for years. They decided to form Rescue Ink to combat the problem of animal abuse on a larger scale.

Working from tips from concerned neighbors and anonymous sources, they have rescued countless animals, including a dognapped bulldog and 180 cats from the home of a hoarder. In between rescues, they’ve protested the barbaric practices of a horse slaughterhouse, visited schools to educate children about animal kindness and that “abusers are losers,” and participated in Puppy Mill Awareness Day in Lancaster, Pennsylvania.

Former Newsday writer Denise Flaim chronicles their adventurous tales, detailing just what these brawny bikers, who will stop at nothing within the bounds of the law, can teach us all about respecting the creatures in our midst.