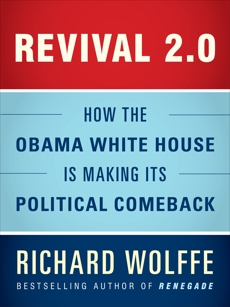 Synopsis: Revival 2.0 tells the dramatic inside story of how President Obama and his team have regained their footing and learned to fight for their political survival.

· The story behind the personnel shake-ups and reorganization of the administration—from the departure of Rahm Emanuel and Robert Gibbs to the arrival of new figures the likes of Bill Daley and Jay Carney.
· How the White House effectively pushed through their agenda (including the START treaty and repeal of "don't ask, don't tell") with a lame-duck Congress, and positioned itself well in dealing with the new Republican-controlled House over the looming budget battles and a defense of their health care plan.
· The internal debate between Survivalists and Revivalists over the response to the revolutions in Tunisia, Egypt, and Libya.
· The campaign strategy for the 2012 election as told directly by Obama's top campaign team—David Axelrod and David Plouffe in particular.
· Key insights into the killing of Osama bin Laden, how it’s the crowning achievement of Obama's political turnaround, and solidifies his stature as commander-in-chief in the war on terror.

An up-to-minute guide on how an administration attempts to navigate dangerous political waters, Revival 2.0 is a must-read to understanding how Obama has grown into his role as a president and has found a way to lead effectively.