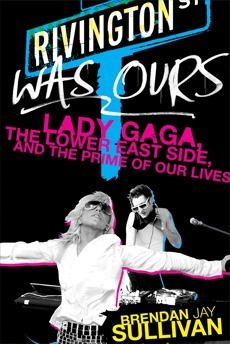 Lady Gaga's old friend and former DJ Brendan Jay Sullivan paints a vivid picture of the downtown scene from which she emerged.

Brendan Jay Sullivan was an up-and-coming DJ in New York City when he met Stefani Germanotta, then a struggling artist, in 2006. She was a go-go dancer who sewed her own outfits but had bigger ambitions—she wanted nothing less than to take over the music world.

In this intimate portrait of the budding star who would soon catapult to fame and fortune, the author describes afternoons sitting with Gaga on the floor of her bare Lower East Side apartment, drinking wine from pint glasses and plotting out the pop stardom that awaited her.

Filled with stories of love and heartbreak among Gaga and Sullivan and their circle of aspiring musicians and performers, and set against the vibrant backdrop of the downtown bars and parties of the mid-aughts, Rivington Was Ours is both a love letter to New York and a glimpse behind the veil of one of the biggest musical icons of her generation.