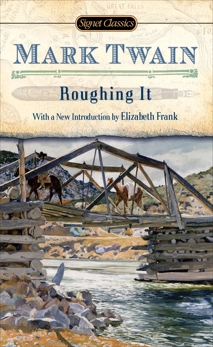 Synopsis: The celebrated author of The Adventures of Tom Sawyer and Adventures of Huckleberry Finn mixes fact and fiction in a rousing travelogue that serves as “a portrait of the artist as a young adventurer.”*

In 1861, young Mark Twain found himself adrift as a newcomer in the Wild West, working as a civil servant, silver prospector, mill worker, and finally a reporter and traveling lecturer. Roughing It is the hilarious record of those early years traveling from Nevada to California to Hawaii, as Twain tried his luck at anything and everything—and usually failed. Twain’s encounters with tarantulas and donkeys, vigilantes and volcanoes, even Brigham Young, the Mormon leader, come to life with his inimitable mixture of reporting, social satire, and rollicking tall tales.