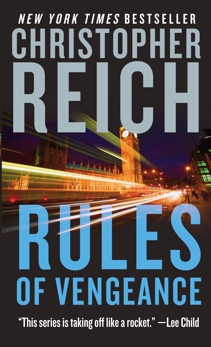 Months after foiling an international terrorist attack, Doctors Without Borders physician Jonathan Ransom is working under an assumed name in a remote corner of Africa.  His wife, Emma, desperate to escape the wrath of Division, the secret American intelligence agency she betrayed, has been in hiding. Both look forward to sharing a stolen weekend in London—until a terrorist attack ruins their romantic rendezvous.  In the aftermath, Emma disappears and Jonathan is apprehended by the police and threatened, unless he helps secure his wife’s capture.  He embarks on a breathless chase across Europe, searching for Emma, and keeping Division at bay . . . until he realizes that all along he’s been a pawn in a high-stakes game of international intrigue far beyond his imagining.

Follow the Rules:
Don't miss Christopher Reich's new thriller, Rules of Betrayal, coming in hardcover in July. The first novel in the series, Rules of Deception, is available now in paperback.