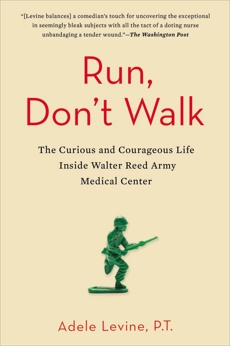 In her six years at Walter Reed Army Medical Center, Adele Levine rehabilitated soldiers admitted in worse and worse shape. As body armor and advanced trauma care helped save the lives—if not the limbs—of American soldiers fighting in Afghanistan and Iraq, Walter Reed quickly became the world leader in amputee rehabilitation. But no matter the injury, physical therapy began the moment the soldiers emerged from surgery.

Days at Walter Reed were intense, chaotic, consuming, and heartbreaking, but they were also filled with camaraderie and humor. Working in a glassed-in fishbowl gymnasium, Levine, her colleagues, and their combat-injured patients were on display at every moment to tour groups, politicians, and celebrities. Some would shudder openly at the sight—but inside the glass and out of earshot, the PTs and the patients cracked jokes, played pranks, and compared stumps.

With dazzling storytelling, Run, Don’t Walk introduces a motley array of oddball characters including:  Jim, a retired lieutenant-colonel who stays up late at night baking cake after cake, and the militant dietitian who is always after him; a surgeon who only speaks in farm analogies; a therapy dog gone rogue; —and Levine’s toughest patient, the wild, defiant Cosmo, who comes in with one leg amputated and his other leg shattered.

Entertaining, engrossing, and ultimately inspiring, Run, Don’t Walk is a fascinating look into a hidden world.