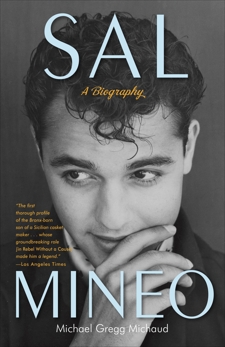 Synopsis: Sal Mineo is probably most well-known for his unforgettable, Academy Award–nominated turn opposite James Dean in Rebel Without a Cause and his tragic murder at the age of thirty-seven. Finally, in this riveting new biography filled with exclusive, candid interviews with both Mineo’s closest female and male lovers and never-before-published photographs, Michael Gregg Michaud tells the full story of this remarkable young actor’s life, charting his meteoric rise to fame and turbulent career and private life.

One of the hottest stars of the 1950s, Mineo grew up as the son of Sicilian immigrants in a humble Bronx flat. But by age eleven, he appeared on Broadway in Tennessee Williams’s The Rose Tattoo, and then as Prince Chulalongkorn in the original Broadway production of The King and I starring Yul Brynner and Gertrude Lawrence. This sultry-eyed, dark-haired male ingénue of sorts appeared on the cover of every major magazine, thousands of star-struck fans attended his premieres, and millions bought his records, which included several top-ten hits.

His life offstage was just as exhilarating: full of sports cars, motor boats, famous friends, and some of the most beautiful young actresses in Hollywood. But it was fourteen-year-old Jill Haworth, his costar in Exodus—the film that delivered one of the greatest acting roles of his life and earned him another Academy Award nomination and a Golden Globe win—with whom he fell in love and moved to the West Coast. But by the 1960s, a series of professional missteps and an increasingly tumultuous private life reversed his fortunes.

By the late sixties and early seventies, grappling with the repercussions of publicly admitting his homosexuality and struggling to reinvent himself from an aging teen idol, Mineo turned toward increasingly self-destructive behavior. Yet his creative impulses never foundered. He began directing and producing controversial off-Broadway plays that explored social and sexual taboos. He also found personal happiness in a relationship with male actor Courtney Burr. Tragically, on the cusp of turning a new page in his life, Mineo’s life was cut short in a botched robbery.

Revealing a charming, mischievous, creative, and often scandalous side of Mineo few have known before now, Sal Mineo is an intimate, moving biography of a distinctive Hollywood star.