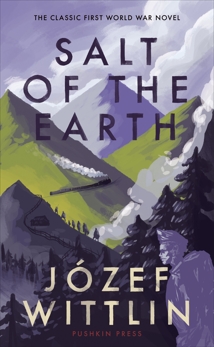 Salt of the Earth

Synopsis: The classic pacifist novel by a major Polish writer, who was nominated for the Nobel Prize

'Only the villages are asleep, the eternal reservoir of all kinds of soldiery, the inexhaustible source of physical strength'

The villagers of the Carpathian mountains lead a simple life at the beginning of the twentieth century - much as they have always done. They are isolated and remote, and the advances of the outside world have not touched them. Among them - Piotr, a bandy-legged peasant, whose 'entire life involved carrying things'. A notional subject of the Austro-Hungarian Empire, all he wants in life is an official railway cap, a cottage with a mouse-trap and cheese, and a bride with a dowry.

But then the First World War comes to the mountains, and Piotr is drafted into the army. Unwilling, uncomprehending, the bewildered Piotr is forced to fight a war he does not understand - against his national as well as his personal interest.

In a new translation, authorised by the author's daughter, Salt of the Earth is a strongly pacifist novel inspired by the Odyssey, about the consequences of war on ordinary men.