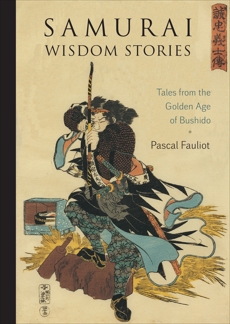 Samurai Wisdom Stories: Tales from the Golden Age of Bushido

Synopsis: A collection of samurai stories, drawn from traditional sources, of battles, strategy, conflict, and intrigue--featuring some of the greatest warriors and military leaders of the samurai era.


Martial artist and samurai scholar Pascal Fauliot has collected and retold twenty-eight wisdom tales of the samurai era. The tales are set in the golden age of bushido and represent the pinnacle of traditional Japanese culture in which aristocratic tastes, feudal virtues, and martial skills come together with the implacable insights of Zen. Some of the stories--like "The Samurai and the Zen Cat"--are iconic; others are obscure. They feature notable figures from samurai history and legend: miltary leaders and strategists such as Oda Nobunaga, Toyotomi Hideyoshi, and Tokugawa Ieyasu; sword masters; ronin; the warrior monk Benkei, and the ninja-samurai Kakei Juzo, among many others. These samurai stories are pithy and engaging, and include tales of battle, strategy, loyalty conflicts, court intrigues, breakthroughs in a warrior's development, and vengeance achieved or foregone. Each tale reveals a gesture or an outcome that represents greater insight or higher virtue.