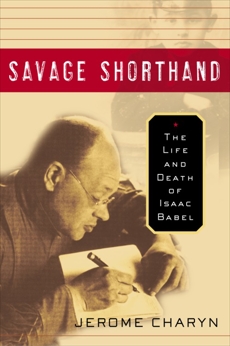 Savage Shorthand: The Life and Death of Isaac Babel

Synopsis: Hailed as the first great Soviet writer, Isaac Babel was at once a product and a victim of violent revolution. In tales of Cossack marauders and flashy Odessa gangsters, he perfectly captured the raw, edgy mood of the first years of the Russian Revolution. Masked, reckless, impassioned, charismatic, Babel himself was as fascinating as the characters he created. At last, in renowned author Jerome Charyn, Babel has a portraitist worthy of his quicksilver genius.

Though it traces the arc of Babel’s charmed life and mysterious death, Savage Shorthand bursts the confines of straight biography to become a meditation on the pleasures, torments, and meanings of Babel’s art. Even in childhood, Babel seemed destined to leave a mark. But it was only when his mentor, Maxim Gorky, ordered him to go out into the world of revolutionary Russia that Babel found his true voice and subject. His tales of the bandit king Benya Krik and the brutal raids of the Red Cavalry electrified Moscow. Overnight, Babel was a celebrity, with throngs of admirers and a train of lovers.

But with the rise of Stalin, Babel became a living ghost. Charyn brilliantly evokes the paranoid shadowland of the first wave of Stalin’s terror, when agents of the Cheka snuffed out artists like candle flames. Charyn’s chilling account of the circumstances of Babel’s death–hidden and lied about for decades by Stalin’s agents–finally sets the record straight.

For Jerome Charyn, Babel is the writer who epitomizes the vibrancy, violence, and tragedy of literature in the twentieth century. In Savage Shorthand, Charyn has turned his own lifelong obsession with Babel into a dazzling and original literary work.