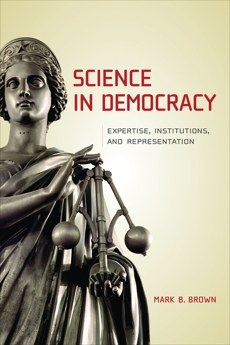 Synopsis: An argument that draws on canonical and contemporary thinkers in political theory and science studies—from Machiavelli to Latour—for insights on bringing scientific expertise into representative democracy.

Public controversies over issues ranging from global warming to biotechnology have politicized scientific expertise and research. Some respond with calls for restoring a golden age of value-free science. More promising efforts seek to democratize science. But what does that mean? Can it go beyond the typical focus on public participation? How does the politics of science challenge prevailing views of democracy? In Science in Democracy, Mark Brown draws on science and technology studies, democratic theory, and the history of political thought to show why an adequate response to politicized science depends on rethinking both science and democracy.

Brown enlists such canonical and contemporary thinkers as Machiavelli, Hobbes, Rousseau, Dewey, and Latour to argue that the familiar dichotomy between politics and science reinforces a similar dichotomy between direct democracy and representative government. He then develops an alternative perspective based on the mutual shaping of participation and representation in both science and politics. Political representation requires scientific expertise, and scientific institutions may become sites of political representation. Brown illustrates his argument with examples from expert advisory committees, bioethics councils, and lay forums. Different institutional venues, he shows, mediate different elements of democratic representation. If we understand democracy as an institutionally distributed process of collective representation, Brown argues, it becomes easier to see the politicization of science not as a threat to democracy but as an opportunity for it.