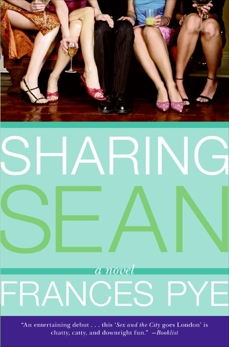 Sharing Sean is a fabulously entertaining, and comedic debut novel in which four women in their late thirties–with no time, or desire for a full time relationship–hatch a plan to "share" a man.

Not all women read bridal magazines, shop for dates on the internet, and covet the letters M., R., and S.. Some women prefer their baggage to be the purse variety and aren't seeking love or even fidelity–just a man who is willing to play by her rules. In the smart, wry, entertaining debut novel, Sharing Sean, Frances Pye introduces four such women in their late thirties–with no time, or desire for a committed relationship–and the unintended consequences that result when they hatch a bold plan to share one Mr. Right.

Singles Lily, Terry, Jules and Mara meet for Sunday brunch at least once a month to bemoan the lack of a man who'll meet their individual needs. Lily longs for two or three nights a week of uncomplicated–but passionate–sex; Terry, wants a stand–in father figure for her teenage son; Jules is looking for some no–strings–attached–sperm to fulfil her dream of becoming a parent; and Mara, a widow, needs just enough intrigue to help her begin to let go of the bittersweet memories of her deceased husband.

They're each equally frustrated until Sean comes into Lily's life. The owner of a small construction company, Sean is great–looking and in bed. Initially he even agrees to Lily's terms for a relationship. But ultimately, he is left longing for more than just sex, and when he presses her for a bigger commitment, Lily dumps him. But over a long Sunday brunch, it becomes clear that Sean could give each of them exactly what they need. So, Lily decides the best solution for all is to share him! Audacious and unconventional, their plan is downright scandalous–and all the more brilliant, if they can pull it off without Sean's knowledge.

Trouble being, even though these resourceful women think they can offer him everything he wants: sex; admiration; friendship; children–sometimes a man just doesn't want to be the object of so many desires..or hidden agendas!