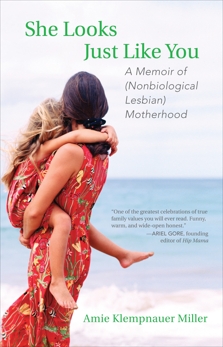 She Looks Just Like You: A Memoir of (Nonbiological Lesbian) Motherhood

Synopsis: After ten years of talking about children, two years of trying (and failing) to conceive, and one shot of donor sperm for her partner, Amie Miller was about to become a mother. Or something like that.

Over the next nine months, as her partner became the biological mom-to-be, Miller became . . . what? Mommy's little helper? A faux dad?

As a midwestern, station wagon-driving, stay-at-home mom—and as a nonbiological lesbian mother—Miller both defines and defies the norm. Like new parents everywhere, she wrestled with the anxieties and challenges of first-time parenthood-including neurotic convictions that her child was chronically ill and the muddled confusion of sleeplessness. But unlike most mothers, she experienced pregnancy and birth only vicariously. Unlike biological parents, she had to stand before a judge to adopt her own daughter. And unlike most straight parents, she wondered how to respond when strangers gushed, "I bet Daddy's proud," or "She has your eyes."

Miller began searching for a role that would fit her experience, somewhere in the unexplored zone between mother and father, gay and straight. Sometimes she felt like a dad in drag, other times like a lesbian June Cleaver. Through it all, she and her partner became something new—even as the presence of a baby rattled the bones of their eighteen-year relationship.

Part love story, part comedy, part quest, Miller's candid and often humorous memoir is a much-needed cultural roadmap to what it means to become a parent, even when the usual categories do not fit.