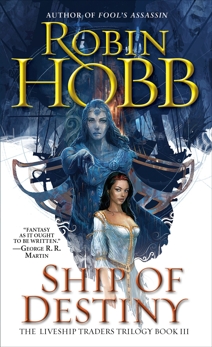 Synopsis: “A truly extraordinary saga . . . The characterizations are consistently superb, and [Hobb] animates everything with love for and knowledge of the sea.”—Booklist

As Bingtown slides toward disaster, clan matriarch Ronica Vestrit, branded a traitor, searches for a way to bring the city’s inhabitants together against a momentous threat. Meanwhile, Althea Vestrit, unaware of what has befallen Bingtown and her family, continues her perilous quest to track down and recover her liveship, the Vivacia, from the ruthless pirate Kennit.

Bold though it is, Althea’s scheme may be in vain. For her beloved Vivacia will face the most terrible confrontation of all as the secret of the liveships is revealed. It is a truth so shattering, it may destroy the Vivacia and all who love her, including Althea’s nephew, whose life already hangs in the balance.

Praise for Robin Hobb and the Liveship Traders Trilogy

“Fantasy as it ought to be written . . . Robin Hobb’s books are diamonds in a sea of zircons.”—George R. R. Martin

“A major work of high fantasy, reading like a cross between Tolkien and Patrick O’Brian . . . one of the finest fantasy sagas to bridge the millennium.”—Publishers Weekly

“Rich, complex . . . [Hobb’s] plotting is complex but tightly controlled, and her descriptive powers match her excellent visual imagination. But her chief virtue is that she delineates character extremely well.”—Interzone