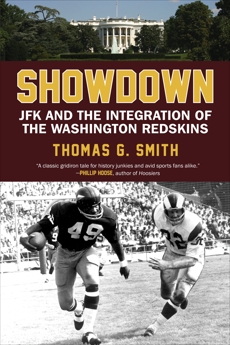 Showdown: JFK and the Integration of the Washington Redskins

Synopsis: In 1961—as America crackled with racial tension—the Washington Redskins stood alone as the only professional football team without a black player on its roster. In fact, during the entire twenty-five-year history of the franchise, no African American had ever played for George Preston Marshall, the Redskins’ cantankerous principal owner. With slicked-down white hair and angular facial features, the nattily attired, sixty-four-year-old NFL team owner already had a well-deserved reputation for flamboyance, showmanship, and erratic behavior. And like other Southern-born segregationists, Marshall stood firm against race-mixing. “We’ll start signing Negroes,” he once boasted, “when the Harlem Globetrotters start signing whites.” But that was about to change.

Opposing Marshall was Interior Secretary Stewart Udall, whose determination that the Redskins—or “Paleskins,” as he called them—reflect John F. Kennedy’s New Frontier ideals led to one of the most high-profile contests to spill beyond the sports pages. Realizing that racial justice and gridiron success had the potential either to dovetail or take an ugly turn, civil rights advocates and sports fans alike anxiously turned their eyes toward the nation’s capital. There was always the possibility that Marshall—one of the NFL’s most influential and dominating founding fathers—might defy demands from the Kennedy administration to desegregate his lily-white team. When further pressured to desegregate by the press, Marshall remained defiant, declaring that no one, including the White House, could tell him how to run his business.

In Showdown, sports historian Thomas G. Smith captures this striking moment, one that held sweeping implications not only for one team’s racist policy but also for a sharply segregated city and for the nation as a whole. Part sports history, part civil rights story, this compelling and untold narrative serves as a powerful lens onto racism in sport, illustrating how, in microcosm, the fight to desegregate the Redskins was part of a wider struggle against racial injustice in America.