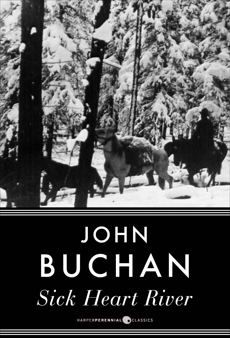 Sir Edward Leithen is in London when he is diagnosed with tuberculosis and told that he has a year to live. Initially unsure of how to live out his remaining days, Leithen is unexpectedly given an opportunity to help search for a missing man in the Canadian north. Accepting the task, Leithen embarks on a physical and spiritual journey that helps him come to terms with his life, death, and legacy.

John Buchan is most widely known for his adventure novels, such as those featuring the spy Richard Hannay. The spiritually poignant Sick Heart River is a departure from Buchan’s usual themes, even more so because it was the last book he wrote, and was published posthumously after his accidental death in 1940. The main character, Edward Leithan, had appeared in several other, more lighthearted books of Buchan’s, including The Power-House and John Macnab.