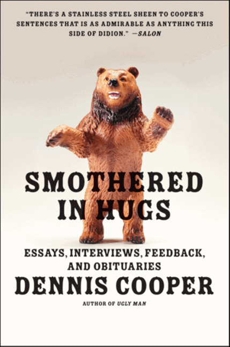 “In another country or another era, Dennis Cooper’s books would be circulated in secret, explosive samizdat editions that friends and fans would pass around and savor like forbidden absinthe.” —New York Times Book Review

“His work belongs to that of Poe, the Marquis de Sade, Charles Baudelaire, and Georges Bataille, other writers who argued with mortality.” — San Francisco Chronicle

"There’s a stainless steel sheen to Cooper’s sentences that is as admirable as anything this side of Didion." — Salon

From the internationally acclaimed author of Ugly Man and one of “the last literary outlaws in mainstream American fiction” (Bret Easton Ellis) comes a survey of his cultural criticism. From interviews with celebrities such as Leonard DiCaprio and Keanu Reeves; to obituaries for Kurt Cobain and River Phoenix; to writings on social issues—including the touchstone piece “AIDS: Words from the front”; Smothered in Hugs spans three decades of journalism from Dennis Cooper.