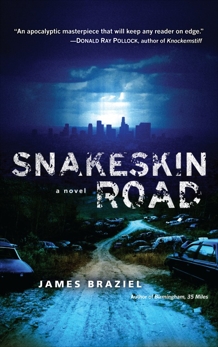 Synopsis: In this powerful and moving new novel by James Braziel, author of Birmingham, 35 Miles, a woman begins a harrowing journey of survival along a passage of terror—and hope.…

They call it Snakeskin Road. An ever-changing network of highways, rivers, and forgotten trails, it’s used by profiteers of a grim new traffic in human cargo. The catastrophic climatic changes that transformed the Southeast into a vast, inhospitable desert have left its desperate inhabitants with no choice but indentured servitude. Jennifer Harrison is among those destined for the farms, mines, casinos, and brothels of the midwestern “Free Zones.” Carrying the unborn child of her deceased husband, Mathew, Jennifer hopes that in three years’ time she’ll be free to reach Chicago—and a world better than the one she is leaving.

Along with a thirteen-year-old refugee entrusted to her care, Jennifer begins a hazardous pilgrimage across a countryside of barricaded city-states, lawless camp towns, marauding gangs, and what’s left of a corrupt government. But nothing she faces is more dangerous than a man named Rosser—a ruthlessly opportunistic bounty hunter determined to bring her back to Birmingham. In a world where hope is always a mile ahead, Jennifer has one last chance before the road disappears forever.