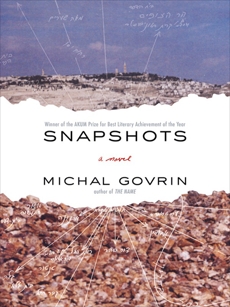 Synopsis: From one of Israel's most celebrated writers, an ambitious and heartbreaking novel, winner of Israel's Akum Prize for the Book of the Year, that examines through one woman's life the Jewish story and the state of Israel in the most intimate way possible.

Ilana Tsuriel was a beautiful, brilliant Israeli intellectual and architect, the estranged wife of a prominent Holocaust scholar and the daughter of a legendary founding Zionist. At the beginning of Snapshots, she dies in a tragic car wreck, leaving her husband, Alain, to piece together the woman he thought he knew from the documents she left behind. Snapshots is assembled from her notes, photos, and drawings, which reveal Ilana's passionate, turbulent, wandering life of love and creativity around the capitals of the world. They portray a woman torn between her life in the United States and Israel; a woman who, during the first Gulf War when missiles were falling on Tel Aviv, struggled with the desire to protect her family yet still engage herself and her children with her homeland. They also uncover a secret, troubled love affair with a Palestinian man, a daughter's efforts to come to terms with her father's weighty legacy, and plans to build a "Utopian Monument" for peace in the history-laden hills of Jerusalem.

The result is a whirling, wrenching portrait of a woman grappling with every element of her identity, at the center of a novel that has already been feted with prizes and celebrated as a masterwork of contemporary Israeli literature.