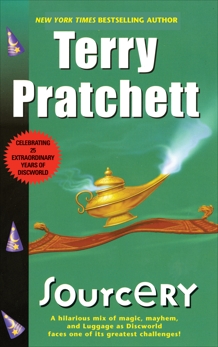 Sourcery: A Novel of Discworld

Sourcery, a hilarious mix of magic, mayhem, and Luggage, is the fifth book in Terry Pratchett's classic fantasy Discworld series.

Rincewind, the legendarily inept wizard, has returned after falling off the edge of the world. And this time, he’s brought the Luggage. But that’s not all… Once upon a time, there was an eighth son of an eighth son who was, of course, a wizard. As if that wasn’t complicated enough, said wizard then had seven sons. And then he had an eighth son — a wizard squared (that’s all the math, really). Who of course, was a source of magic — a sourcerer.

Will the sourcerer lead the wizards to dominate all of Discworld? Or can Rincewind’s tiny band stave off the Apocalypse?