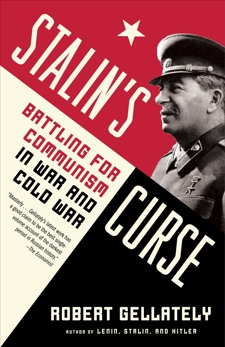 Stalin's Curse: Battling for Communism in War and Cold War

A chilling, riveting account based on newly released Russian documentation that reveals Joseph Stalin’s true motives—and the extent of his enduring commitment to expanding the Soviet empire—during the years in which he seemingly collaborated with Franklin D. Roosevelt, Winston Churchill, and the capitalist West.

At the Big Three conferences of World War II, Joseph Stalin persuasively played the role of a great world leader, whose primary concerns lay in international strategy and power politics, and not communist ideology. Now, using recently uncovered documents, Robert Gellately conclusively shows that, in fact, the dictator was biding his time, determined to establish Communist regimes across Europe and beyond. His actions during those years—and the poorly calculated responses to them from the West—set in motion what would eventually become the Cold War. Exciting, deeply engaging, and shrewdly perceptive, Stalin’s Curse is an unprecedented revelation of the sinister machinations of Stalin’s Kremlin.