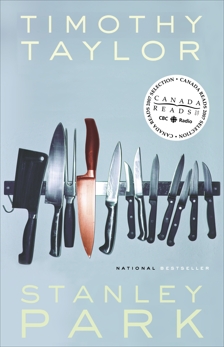 Synopsis: A young chef who revels in local bounty, a long-ago murder that remains unsolved, the homeless of Stanley Park, a smooth-talking businessman named Dante — these are the ingredients of Timothy Taylor's stunning debut novel — Kitchen Confidential meets The Edible Woman.

Trained in France, Jeremy Papier, the young Vancouver chef, is becoming known for his unpretentious dishes that highlight fresh, local ingredients. His restaurant, The Monkey's Paw Bistro, while struggling financially, is attracting the attention of local foodies, and is not going unnoticed by Dante Beale, owner of a successful coffeehouse chain, Dante's Inferno. Meanwhile, Jeremy's father, an eccentric anthropologist, has moved into Stanley Park to better acquaint himself with the homeless and their daily struggles for food, shelter and company. Jeremy's father also has a strange fascination for a years-old unsolved murder case, known as "The Babes in the Wood" and asks Jeremy to help him research it.

Dante is dying to get his hands on The Monkey's Paw. When Jeremy's elaborate financial kite begins to fall, he is forced to sell to Dante and become his employee. The restaurant is closed for renovations, Inferno style. Jeremy plans a menu for opening night that he intends to be the greatest culinary statement he's ever made, one that unites the homeless with high foody society in a paparazzi-covered celebration of "local splendour."