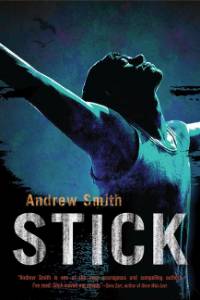 “Suggest this to readers who can handle the intensity of Smith's In the Path of Falling Objects (2009) and The Marbury Lens (2010, both Feiwel & Friends).” —School Library Journal

“The violence of the story is intense, but so is the deep loyalty between the brothers…” —Horn Book Magazine

“The prose is strong and evocative, lapsing into imagistic poetry at times to reveal the intensity of Stick's emotions. Readers should be prepared to have their hearts broken by these vulnerable, utterly lovable brothers.” —BCCB

“Dark, painful, but ultimately hopeful, this is not a book for everyone, but in the right reader's hands, it will be treasured.” —VOYA

“A smaller work from Smith, but one that sustains his growing rep as one of the sharpest blades in YA.” —Booklist

“Smith (The Marbury Lens) revs up the emotions and the violence in this realistic and powerful tale, bringing in sexual abuse, hard drugs, and homelessness, while including enough positive characters to give Stick the support he desperately needs, providing for an imperfect but believable happy ending.” —Publishers Weekly, starred review