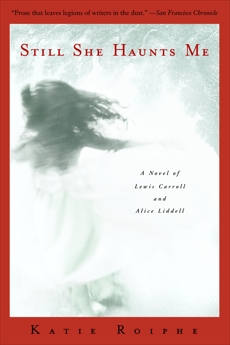 Still She Haunts Me: A Novel of Lewis Carroll and Alice Liddell

Synopsis: Charles Lutwidge Dodgson was a shy Oxford mathematician, reverend, and pioneering photographer. Under the pen name Lewis Carroll he wrote two stunning classics that liberated children’s literature from the constraints of Victorian moralism. But the exact nature of his relationship with Alice Liddell, daughter of the dean of his college, and the young girl who was his muse and subject, remains mysterious.

Dodgson met Alice in 1856, when she was almost four years old. Eventually he would capture her in his photographs, and transform the stories he told her into the luminous Alice’s Adventures in Wonderland & Through the Looking-Glass. Then, suddenly, when Alice was eleven, the Liddell family shut him out, and his relationship with Alice ended abruptly. The pages from Dodgson’s diary that may have explained the rift have disappeared.

In imagining what might have happened, Katie Roiphe has created a deep, textured portrait of Alice and Dodgson: she changing from an unruly child to a bewitching adolescent, and he, a diffident, neurasthenic adult whose increasing obsession with her almost destroys him. Here, too, is a brilliantly realized cast of characters that surround them: Lorina Liddell, Alice’s mother, who loves her daughter even as she envies her youth; Edith Liddell, Alice’s resentful little sister; and James Hunt, Dodgson’s speech therapist, an island of sanity in Dodgson’s increasingly chaotic world.