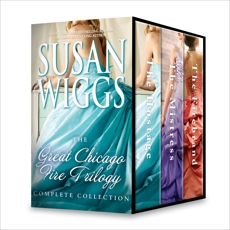 Synopsis: Revisit the beloved Chicago Fire trilogy in these three sweeping, romantic tales from New York Times bestselling author Susan Wiggs.THE HOSTAGEDeborah Sinclair is a beautiful, accomplished young heiress with a staggering dowry, but her fortune does her no good when, one horrible night, Chicago is engulfed in flames. Tom Silver will walk through fire to avenge a terrible injustice—and he may have to. Yet when he makes Deborah a pawn in his revenge, the heat of the inferno fades next to the attraction he feels for his captive. THE MISTRESSKathleen O’Leary is a penniless maid, but tonight she takes a risk and masquerades as a glamorous heiress, thanks to a borrowed gown and her friends’ sense of adventure. To her surprise, the ruse succeeds—even Dylan Kennedy, Chicago’s most eligible bachelor, seems enraptured. But like Kathleen, Dylan isn’t who he says he is….THE FIREBRANDDuring her escape from the flames engulfing Chicago, Lucy Hathaway rescued an orphaned baby from a burning hotel. Five years later, Lucy walks into Rand Higgins’s bank and knows: the child she saved actually belongs to this ruthless financier. Now, to keep the child she’s come to love, she’ll have to give up her hard-won freedom and become his wife.